Andhrapradesh Government have an option to restore Financially 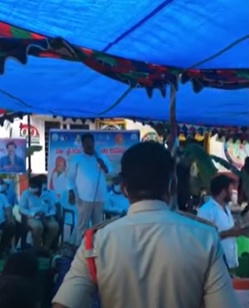 Tanuku MLA  replied to  farmer question that the Government is trying its best to restore financially and diverting some of the funds assist farmers.

Admitted although Government is not having funds the Government of Andhrapradesh can restore financially if Anti Corruption bureau is given liberty to work.

Whatever the Capital may be either VIZAG or AMARAVATHI it shall be quick decision. Non developed states cannot collect commercial taxes except imposing heavy taxes on people who voted to them.  Admit it or not ground level reality regarding to development is very weak in addition to that COVID 19 played a vital role to step back forward. Imposing heavy taxes for the sake of full filling the beneficiary schemes will provoke dissatisfaction among the voters, the beneficiary schemes will remain as show case piece while compared to  the voter who is  paying  taxes. That means the chief will be in a view that he had achieved his goal but in the end of the day ground level reality will be differ.

Mean while the people who are abusing the opposition party at present are the people who praised him when he was ruling the state. People are not enjoying the vulgar comments against MR. Chandrababu naidu nor concluding any opinion against him, because people expected a new face on the ruling of the State, but their opinion is not against any party, thats what Prashanth Kishore got in his vision and he implemented the same strategy. When the elected one is unable to reach the expectation of the people it will definitely show a negative impact on the Party.

In COVID 19 Pandemic season ruling parties failed to protect their people. The Worst part can be opined, people are being vexed, It would be much fine  if  Chief of the state himself supervised and take  the grievance of the people directly instead depending on specific ministry , 100% the face of the party and the strategy of  Prashanth Kishore is MR.Jagana Mohan Reddy as new one and younger one.

A CM response is differ from any thing else, his interference in sensitive issues like Covid 19 is just and necessary, Although his personal appearance cannot be secured, it would be good if his team supervised   the  Covid 19 treatment hospitals personally.

May be the topic is diverting

So to secure the financial resources in the state the Government have to attract investor to invest in the state. It is basic fundamental that  no investor will invest  in any state if he feels insecure. People expect more from the New face of Andhrapradesh. There are many sources if the chief wants to secure and restore financial resources, it can be possible only if the decision maker is one. Possibly if the same  scenario continues there are maximum chances that the one who praise him will definitely pass vulgar comments against the Same person who they praised him. In Democracy Power will not rest in one side.